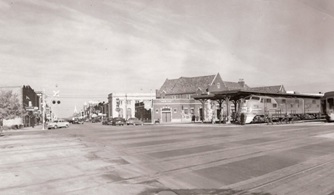 Since 1955, Harvey County United Way has been making long-lasting impacting the community. In the 60 years since, the lives of thousands of residents of all ages and in all communities have been improved as a result.

But it didn’t start out that way. A group of area leaders originally formed a “Community Chest” to raise money for local charities.

In 1954, Walter Claassen was serving as the President and helped guide the organization into a United Way. Annual Meeting notes from February 1955 include a debate over the relationship with the National Foundation for Infantile Paralysis and the Newton Community Chest.

The chief concern of the day, of course, was polio. And in that time it impacted every community across the nation. The National Foundation for Infantile Paralysis was refusing to accept funds collected in “united fund drives,” instead insisting upon holding its own drives as many as four or five times a year.

While a special committee formed by the Harvey County United Community Chest Association conducted a study over two years and found the majority of donors wanted to give “the united way.” The committee recommended this approach to the Chamber, with the understanding that the Foundation would not accept funds collected in this manner.

They wished the Foundation well with the development of the Salk vaccine, and struck out on the course they felt was best for this community. The amount refused by the Foundation, $13,000, was thereby retained locally to assist Harvey County residents “that need help when polio strikes in their homes.”

In 1955, the Harvey County Community Chest Association campaign totaled $49,294. Our friends at First Bank estimate that amount would equate to over $430,000 in today’s dollars.

While polio is no longer a dominant force, the community faces many more afflictions with far-reaching implication. Fortunately, thanks to hundreds of donors, we face those challenges head-on through the work of our Community Investment, Community Impact and Special Projects programs.