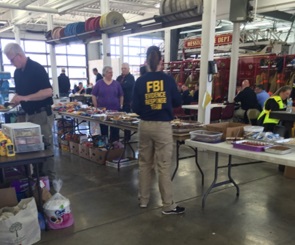 Life can change in an instant. The ripple effect is felt for years, or even generations to come.

Harvey County is no stranger to this experience. In 1990, the residents in the City of Hesston braced as an F5 tornado tore a path through town.

Fast-forward to 2016, and the residents of Hesston and Newton experienced the tragedy of a mass-shooting event spanning the two communities, culminating in fatalities at one of the largest employers in the county. That event is now known as the “Excel Incident.”

Within a month, the western portion of the county burned in the largest wildfire in Kansas history.

For all of these events, and every individual house fire before and since, Harvey County United Way has been there.

Also, we have responsibility to respond to the Western portion of Marion County, should events arise. United Way Worldwide assigns all zip codes in the nation to a United Way organization. In the absence of a local United Way in Marion County, Harvey County United Way is assigned either individually or in partnership with United Way of McPherson County.

Disaster services is an often unknown component of Harvey County United Way’s work. But when our communities are impacted, we are there.